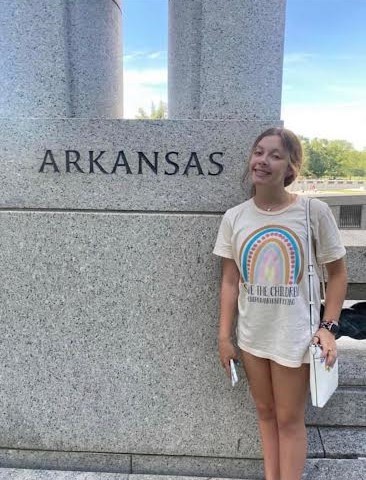 Meadows earned the honor based on her “excellent leadership skills and interest in law and CSI,” said MHS teacher Krisma Smith-Hunter, who nominated Meadows for the honor. “She works extraordinarily hard. She’s dedicated and she has great initiative.”

Meadows, an honors student who is also involved in debate, quiz bowl, student council, Spanish club, and cheer, listened to a forensic scientist and took part in a staged crime scene. She will receive a college credit, in addition to her experience. Meadows also takes part in FOR club, which is a bug program at Marion Junior High that strives to prevent bullying and promote kindness.

Arguably the most popular part of the event was a two-part simulation called “from crime scene to trial,” where students initially gather evidence. Meadows focused on fingerprints and handwriting. On the law side, students gather witnesses for a staged trial. The second part mocks a trial, with testimony from witnesses, as students come to a verdict based on the information they have. Meadows’ group found John Doe not guilty of killing his wife, Jane.

Meadows also toured George Mason University and visited the Washington Monument, the Vietnam Memorial and the Lincoln Monument. Speakers included legendary profiler and FBI Behavioral Analysis unit founder John Douglas and Marvin Anderson, who is a board chair for the Innocence Project. Anderson was wrongfully accused of rape and imprisoned for 20 years.

Envision’s programs are developed by educators and subject-matter professionals. “Using innovative tools and techniques, our activities mirror real-world challenges and facilitate critical thinking and communication among the groups,” said the program’s website. “Our advisors are trained teachers and subject-matter experts who love making a real impact.” More than 80,000 students have attended Envision since the program’s inception in 1985.